Everyone who has ever met me knows that I “Fly for Food.” I am the quintessential foodie, always looking for a tasty local treat. As soon as I landed in El Paso, Texas, I asked the van driver, “If you were here for just one night, where would you eat?” Obviously, he mentioned some local Mexican restaurants which were tempting but then, he made a bold statement to me, “The best wings in the state are right here in El Paso.” Challenge accepted Mr. van driver. “Please point me to these so-called delicious nuggets that you claim are the BEST.”

He aimed me toward Track One, a historic mom-and-pop restaurant established in 1972. This restaurant is located near more than four crew hotels. With its unique ambiance owed to the fact that it is built out of three railroad cars, it offers amazing hospitality and delicious eats. Don't be in a rush if you plan to eat-in because it is very small and popular. If you are in a rush, consider placing an order to-go. The wait time for seating can average 30-45 minutes during peak hours. When I arrived, I was greeted with a smile and was seated at the small but quaint full-service bar. The bartender informed me that all the food was top notch but they are best known for their wings. Pilot. Wings. It’s a natural.

I ordered the Double-Dip Wings, and boy am I happy I did. The wings were large compared with most chain wing places and they were well cooked. When I took the first bite, I fell in love with them immediately. I think that by most, they would probably be considered fried hard or extra crispy in texture. But it is the wing sauce that sets them apart from most Buffalo-style wings. It is a combination of pure honey and hot sauce that can be described as a medium-hot sweet heat.

I only ordered ten to start but then realized my error. I had no leftovers for the next day. I placed another order to go. There was no disappointment, for even reheated, they were just as good, maybe better, than the ones I ate fresh at the bar.

I had the privilege to meet one of the owners, Mrs. Lolly. On my way out, I let her know that their wings had lived up to the hype of “best wings” in El Paso. She thanked me for coming and giving them a try. Then she expressed how grateful she is to all the aircrews who have visited the restaurant. They love serving crew here, so if you find yourself in El Paso, head over to Track One. If you do, let me know what you think of their Double-Dip Wings. 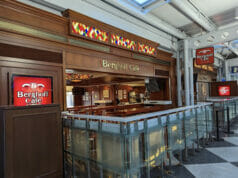 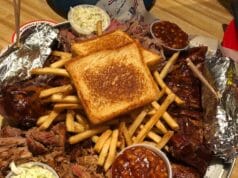 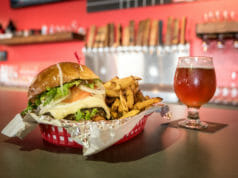