What are unions and what do they do?

For those of you who are new to the airline industry or possibly looking to make the transition to becoming an airline pilot, or even those who have been around for a while – have you ever wondered about what the pilot’s union is or what it does? Maybe you have been curious at some point about who is in the union? Possibly, you have asked if you must be a member and pay dues, and if so, what do you get in return? These questions are fair and appropriate, and ones that I hope to answer for you through a series of articles highlighting the functions and structure of labor unions in the airline industry. It is a heavily unionized environment and understanding how and who represents our collective professional interests to management, state and federal legislators, and the broader industry, and how it impacts our careers is an imperative aspect of being an airline pilot.

Since this is the first article, let us begin with the basics: What a union is and who belongs?

First, a union is a group of workers, in a particular job or profession, who have decided to collectively pool their resources in order to affect positive change in their workplace (e.g., improvements in safety, pay, and benefits), by collectively bargaining with their employer (referred to as “negotiations” and the subject of a future article). Second, unions support their membership by representing their skill, trade, or profession to the broader industry as well as to lawmakers and industry regulators who are in a position to structure rules and regulations that may positively or negatively impact members’ careers and livelihoods. Overall, the idea is that members of a union can have more influence and achieve better quality of work life, as well as personal life, if they act together.

Who belongs to unions? Usually the first images that comes to mind are of those in construction (the trades), factory workers, or perhaps coalminers. Yet, while these are among the many, unions also represent the following careers and professions:

We can add to this list most airline employees (including pilots) in the U.S., as well as many aboard.

The fundamental structure of any union though, is a democratic body of workers, electing representatives from within their workgroups, according to the philosophy and mission of their profession. They typically have their own constitution and by-laws, and often utilize four main branches of governance: general membership, executive board, executive officers, and committees. Thus, it is a representative-type structure that seeks input and guidance from its members, collected by elected representatives, who forward this to executive officers, who in turn assign work and projects to be completed by specific committees made of up volunteers from within the profession.

In the next article, I will share some history of unions – where they come from – and eventually where they are going. In between, we will address more about structure, services, the Railway Labor Act, negotiations, strikes, and the role and responsibility of a union pilot.

Stay tuned to this space for more in the months to come. 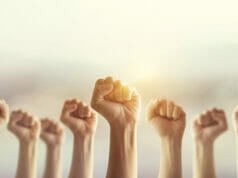