In 1999, husband and wife Danny and Amy Perna launched their flight school with a single aircraft, a used Cessna 152. They were the only two staff members. As he does today, Danny held both FAA flight instructor and A&P licenses. Danny served as flight instructor and Amy kept the books. Fast-forward 22 years: Epic Flight Academy now employs 115 people, and the fleet has expanded to 21 new aircraft and five flight simulators. Epic’s training facility occupies 44,300 square feet located at the New Smyrna Beach Airport on Florida’s east coast. Epic Flight Academy is recognized as one of the fastest-growing flight schools in the world with an unblemished safety record. The company’s motto has always been, “Safety first!”

Located just ten miles south of Daytona Beach, the New Smyrna Beach Airport (EVB) is in Class D airspace with an Air Traffic Control (ATC) tower. There are two Class B airports and two Class C airports within a 40-nautical mile radius of New Smyrna Beach. With 12 other Class D airports nearby, Epic’s student pilots learn how to fly and communicate in highly controlled airspace, land on soft grass runways, and practice different types of approaches, including ILS, RNAV/GPS and VOR. Epic’s location is just one reason it has become a popular flight school.

Epic Flight Academy, originally established as Epic Aviation, began as a flight school and FBO. By 2001, the flight school became the focus. Within the first few years of operation, the organization expanded quickly with the purchase of new Cessna 172s and the hiring of more than a dozen qualified flight instructors. The fleet and staff continued to grow exponentially as student enrollment swelled. The 2008 financial crisis substantially impacted domestic flight training propelling Epic to launch an international outreach initiative, enrolling students from Nepal, Vietnam, Colombia, and Brazil. Epic is authorized to issue the I-20 under the M-1 Visa for international students. By 2019, with the Part 141 flight school celebrating its 20th anniversary, Epic had trained more than 5,000 commercial pilots from more than 80 countries.

Currently, Epic enrolls 200 to 250 flight students annually, with roughly half coming from outside the U.S. In 2020, with international travel restricted due to COVID-19, Epic experienced a surge in domestic flight students. Epic has always embraced the newest technology, so having the capability to provide online ground school became a tremendous asset in 2020. Epic Flight Academy uses Schoology, a virtual learning environment that allows instructors and students to interact during ground school classes. Instructors also use this platform to host virtual demos each month for prospective students who want to get a feel for Epic.

Epic purchases its aircraft new from the factory and maintains its aircraft on site with its team of FAA-certified A&P mechanics. Epic’s fleet is recognizable by its distinctive red tails, which makes the aircraft more visible to other pilots. The Epic aircraft fleet includes:

In the fall of 2020, Epic became the first and only flight school in the world to acquire a custom-built Frasca Cessna 172 Advanced Aviation Training Device (AATD) with Frasca’s motion-cueing system for fixed-wing devices (FMCS-FX). Both students and instructors compare the realistic motion to flying in actual aircraft. This new sim was designed to accurately represent an actual Cessna 172 in flight using motion-cueing and true-to-life graphics with the goal of reducing the amount of time students would need to spend in the aircraft to acquire a pilot’s license. Epic’s instructors are reporting great student progress in the sim with smooth transitions to actual aircraft. In addition to this new simulator, Epic’s ground fleet also includes:

Epic continued its expansion in 2020 with the opening of its FAA-approved Part 147 aircraft mechanic school. The inaugural class began in October. The program takes 18 months and prepares graduates for careers as aviation maintenance technicians (AMTs), airframe and powerplant mechanics (A&Ps), space industry technicians, and more. Epic’s location in New Smyrna Beach, Florida is near Kennedy Space Center. The surge in space travel and research has led to an increased need for qualified technicians, which is why Epic has been working for the past few years to open its mechanic school.

In 2018, Epic Flight Academy signed an articulation agreement with nearby Daytona State College. Epic flight school graduates can transfer flight training hours for a total of 23 credit hours toward an Industrial Management Technology associate’s degree. This AS degree can then be transferred toward a bachelor’s degree at Daytona State College or another college or university. The Epic graduates who are enrolled at DSC are looking forward to the added benefit of having a college degree along with their flying credentials. They know this is especially important if they ever lose their Class 1 medical certificate. Most of the college classes are offered online and last only eight weeks, so Epic graduates find the partnership to be convenient and affordable.

With half of Epic’s student population coming from countries throughout the world outside of the United States, the flight school takes steps to welcome its students and make them feel at home while they’re away from their families. Epic Flight Academy housing is available just a few miles away with an Epic shuttle bus to provide transportation to school and shopping. The school also hosts regular Student Appreciation Days with food and games. Students form lifelong friendships among themselves and with their instructors at Epic. Since New Smyrna Beach is already a popular tourist destination, Epic students also take advantage of the close proximity to the beach where they enjoy swimming, surfing, and other sports.

Epic Flight Academy prides itself on its discerning hiring policies. For example, Epic is known for hiring many of its own graduates as flight instructors. Why? Because Epic knows the rigorous and thorough training program its students complete. Hiring their own graduates make sense because they have been trained with Epic’s emphasis on safety. Founder and CEO Danny Perna has always encouraged hiring and promoting from within the company. For example, Josh Rawlins started at Epic as a teenager sweeping hangar floors. He took accounting classes, earned his A&P license, and received his inspection authorization. Josh became the lead mechanic, director of maintenance, VP, and now serves as Chief Operating Officer.

Epic boasts many distinctive staff, such as Chief Instructor Vic Johnson, who has logged more than 24,000 hours of flight time; Ground School Instructor Captain Judy Rice, who set a world record in 2014 with the National Aeronautic Association (NAA) and who flew around the world in 2015 in a Cessna Citation Mustang CE-510, working with 20,000 plus international students and visiting 35 countries; CFI Hal Maskiell received the Wright Brothers Master Pilot Award in 2017; and Captain Mike Thompson, who teaches Epic’s flight instructor courses and authored Telling Is Not Teaching: The Flight Instructor’s Handbook. This sampling of staff reflects the talent and commitment Epic values.

Epic Flight Academy has been recognized by numerous organizations for its contributions, excellence, and community involvement. Epic strives to serve students, staff, and the community. Epic Flight Academy has been a member of the Better Business Bureau since 2018 and the Southeast Volusia Chamber of Commerce since 2017. Other recognitions include:

One unique feature in particular makes Epic Flight Academy stand out from other flight schools ¬– its vintage DC-7 aircraft displayed on site and visited daily by tourists and aviation enthusiasts. Featured on the Atlas Obscura website, the decommissioned DC-7, which was built by the Douglas Aircraft Company, was part of the American Airlines fleet. In 2012, Danny Perna saved the aircraft from the scrapyards, and it has become a local landmark and popular “selfie” spot. Students and staff can often be spotted taking a lunch break in the shade of this massive aircraft.

Although Epic Flight Academy’s flight school and aircraft mechanic school are physically located in sunny New Smyrna Beach, Fla., its web presence is global. Epic employs staff who engage in live chats 24 hours a day, seven days a week through its website, epicflightacademy.com. The website is a resource for aspiring aviation professionals everywhere. Its content includes aviation resources, student achievements, online articles by Captain Judy Rice, and information about all aspects of aviation careers. Epic publishes a monthly newsletter, the Epic Buzz, which is archived on the website along with press releases, events, and other news. The site also features interactive campus maps, webcams, an online store, and links to useful resources, such as the KEVB control tower. Epic Flight Academy also has a robust social media platform featuring alumni news, current events, and other news. These include:

Epic graduates frequently refer to the “Epic family” in their posts and online reviews. Epic Flight Academy is a family business, after all, and staff members welcome students into the Epic family with genuine sincerity. From the first contact online, to new student orientation to the ringing of the first checkride bell, to the new job as First Officer, Epic Flight Academy takes great pride in its graduates’ achievements. Epic strives to keep in touch with its alumni and shares their success stories on the website and in social media. As Epic grads go on to serve as captains and first officers for major airlines, the entire Epic community celebrates every milestone.

“Our mission is to provide exceptional training to aspiring aviation professionals through innovative technology and instruction in a safe and timely manner.” 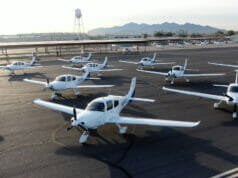 United’s Aviate Academy is Off the Ground  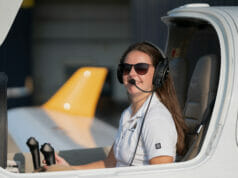 Trailblazing in the flight training industry 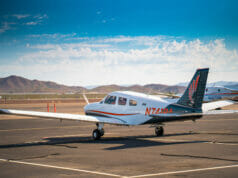